A blinking red light in Suwannee, Florida warns that County Road 349 dead ends here, at the water’s edge. Surrounded on three sides by the Lower Suwannee National Wildlife Refuge, Suwannee might as well be an island. The closest town, Old Town, is almost 25 miles away down a stretch of road bordered by swamp, marsh, and water. People come for the water, the chance to live, work, and play where the fresh water of the Suwannee River mingles with the salty Gulf of Mexico. But no one forgets for long that the waters that give also take away. 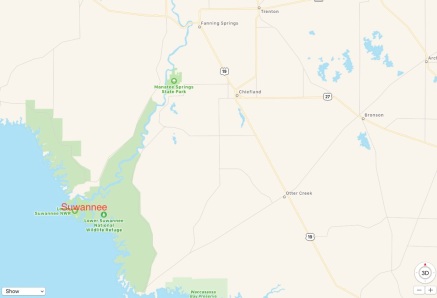 Photographer Anne Ledbetter and I came to Suwannee to learn about the famed Suwannee River and the people along the river. In 2016, we teamed up for the River of Dreams project, exhibited at Gainesville’s Matheson History Museum, to document lifeways, past and present, along the St. Johns River. Now, we’re focusing on the ‘river people of Florida,’ looking at people and places in Florida’s varied riverine cultures. So why not begin with the terminus of the iconic Suwannee River?

Anne and I arrived at Bill’s Fish Camp and Motel on a rainy evening. When we called to say we might arrive after 5 pm, they said not to worry, that the key would be in the room. Florida’s fish camps offer a taste of the ‘Old Florida,’ the quirky pre-Disney Florida that is slowly disappearing. We relaxed on the screen porch with a glass of wine and considered our options which were rapidly shifting.

Ominous clouds hinted that rain might be the dominant theme of our trip. We had hoped for sunny weather to showcase the beauty of the river and the town. The car was loaded with paddling gear so we could photograph different parts of the river. But, who wants a book full of gray rain shots? In reality, though, the rain taught us about life at the edge of the Gulf.

That first evening, Anne and I walked down the road, hoping the advertised  Salt Creek Restaurant both existed and was open on a Monday night. In the quarter-mile walk to the restaurant, only one car passed us. I commented that I could lie down and take a nap in the middle of the road and probably be safe. County Road 349 divides two bodies of water: the fresh water Suwannee on the left and Salt Creek on the right, both flowing to the Gulf. Fortunately the restaurant was open as promised, and the food was terrific. Only a handful of people were eating that night, but the large deck in the back suggested that the town’s population multiplied on holidays and weekends.

That evening and the next morning, Anne and I walked around the town, trying to get pictures before the rain began again. The few people we saw driving around waved or stopped and said hello—it’s a friendly place.  And peaceful. I imagine that Suwannee feels much different when fishing boats line the boat ramps in high season. When we visited in the summer, the quiet felt relaxing and I could see why people move there. That and the fishing.

We saw a range of homes in town, from trailers to single family homes to large (probably weekend) homes. Many of Suwannee’s buildings were raised—even the Baptist Church. Flooding and storm surge are constant threats, and nobody in Suwannee has forgotten how Hurricane Hermine pummeled the Gulf coast two years ago.

Eventually the deluge began. It rained and rained. For hours, the radar was a kaleidoscope of green, orange, and yellow. Water pooled on the road, covering it entirely in some places. We were soaked. At that point, we realized that the kayak and paddleboard would remain on the car. No pretty river pictures that day.

We drove to the Suwannee Library Technical Center to look at trail maps and regional information. While we spoke with the librarian, other residents dropped in. One man asked to use a copier, and someone else called asking about a notary. One woman, noticing that Anne and I were restless in the rain, invited us to an exercise class at her church. The school bus driver pointed out that the children ride the 24 miles up 349 to Old Town to go to school, a long drive for young children. Seeing how the library provided a hub for residents, I realized that the rain taught me so much about life in this river town.  And this is why I enjoy fieldwork, to step briefly into other worlds, lives, and perspectives.

After the rain subsided, we drove east on CR 349 towards Fanning Springs. This part of the Suwannee watershed feels remote today, but it must have been virtually unreachable before this network of roads and bridges. Fanning Springs State Park holds the ruins of the first bridge to span the river. Once the people on either side of the Suwannee were connected, they held a square dance on the bridge to celebrate. 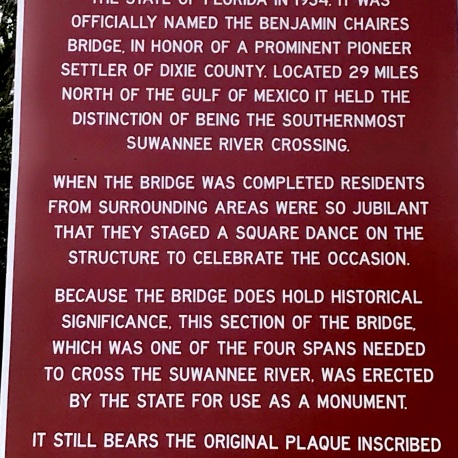 We didn’t get what we came for, but we got what we needed. A reminder of the power of rain, water, and flooding and how the flows of these waters shape human lives. One library patron pointed out that recent rains had saturated the ground and made further rainfall or storm surge especially dangerous. The water has nowhere else to go but onto roads and homes, as we have seen in the aftermath of Hurricane Florence. Florida is a state of water extremes, alternating between flooding and drought, something to remember as we march into the final lap of hurricane season. Suwannee’s blinking light and the guard rail below keep us out of the water, but it can’t keep the water off the road. 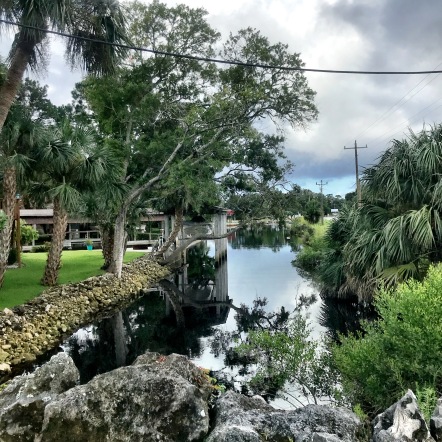