On December 31, our kayaks packed and loaded, our group of six left the Ranger Station at Everglades City and headed for Lulu Key. Lulu Key  straddles the borders of the Ten Thousand Islands and the Everglades.  Interestingly, though we wanted a wilderness paddle, to spend New Years Eve ‘away from it all’, we entered an area that has hosted waves of residents, from the Calusa to turn of the century homesteaders and outlaws to contemporary visitors. 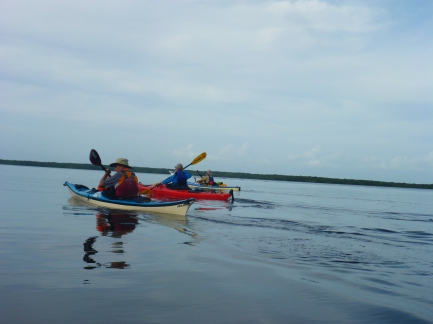 All of us are experienced wilderness paddlers, but we went with Don McCumber and Mike Akerman of Everglades Area Tours to learn more about the human and natural histories of this region. We all knew that Don is a self-proclaimed story-teller, and, over the three days, Don regaled us the strange and bizarre habits of people, plants, and animals.

I had just finished reading Killing Mr. Watson by Peter Mathiesson, an historical novel about Ed Watson—farmer, entrepreneur, and possible serial killer who homesteaded on the Chatham River in the Ten Thousand Islands. Mr. Watson apparently killed his hired men instead of paying them—a rather chilling austerity measure, and this book depicts the wild west character of life in this remote part of Florida in the early 1900s. As I read the book, I recognized some of the rivers and keys from previous paddling trips, but I had yet looked into the region’s history before.  The store on Chokoloskee Island run by Ted Smallwood, a character in Killing Mr. Watson, is now a museum about Chokoloskee history.

Camp Lulu Key is relatively easy to find because it is on the exterior, on the gulf. Without map, compass, and gps, it would be easy to get lost. And, for several hundred years now, people have come to this area of Florida to disappear, escaping the law or persecution, among other things. 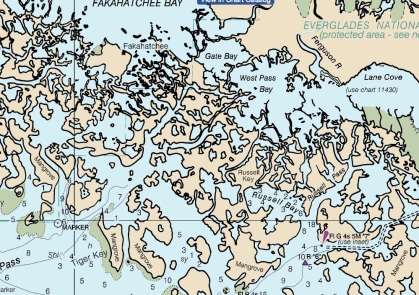 From Lulu Key, we paddled north, inward, first to West Pass, matching the shapes on our charts to the land masses we passed. We wove our way through passes and channels, all lined with mangroves. The subtly different shades of green alerted us to the narrow channels between islands. 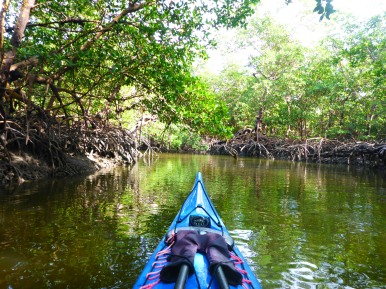 We rode the incoming tide to Fakahatchee Island, home to a small fishing community in the early 1900s. We beached our kayaks on the boat landing, after receiving permission from the two men who were camping there. 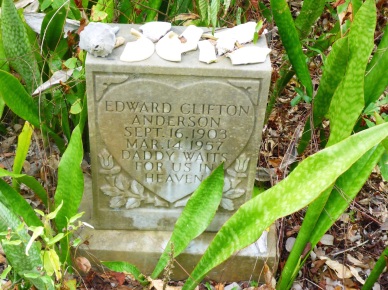 Inland, we found a small cemetery with headstones mostly from the Daniels and Anderson families. The islands hold other ruins but the ubiquitous mosquitos discouraged us from further exploration. Although there has been no official settlement on Fakahatchee Island for decades, the island shows evidence of recent habitation. 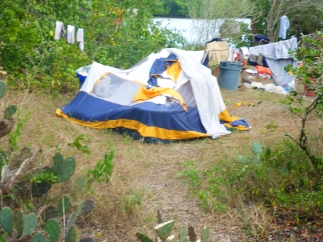 We left the boat ramp, circumnavigating the island counter-clockwise and saw the cistern and the pilings that once supported the fish-house, where the homesteaders kept their fish on ice. Today, pelicans and other birds appreciate the perch. 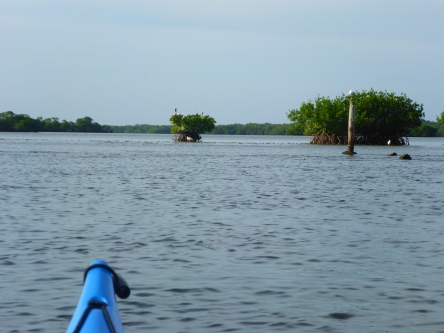 The other side of the island exposed the layers of shells that the Calusa had much used to build up the island, centuries before. Fakahatchee was one of the higher elevations among these low-lying islands, and the mounds laid by the Calusa provided habitat for turn of the century settlers and later campers. 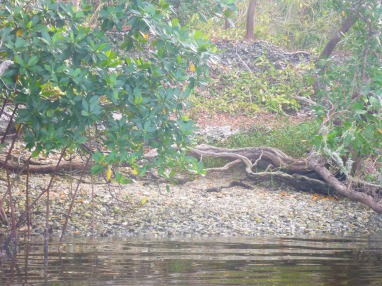 After we left Fakahatchee Island, we wended our way back through the mangrove islands, now fighting the tide, and finally reached our camp on Lulu Key in time for the sunset. I was glad to be back in the open, on the gulf. The interior is beautiful, but its convoluted and quiet passages remind me that the Ten Thousand Islands and the Everglades can still provide refuge for those who wish to slip away into the wild.